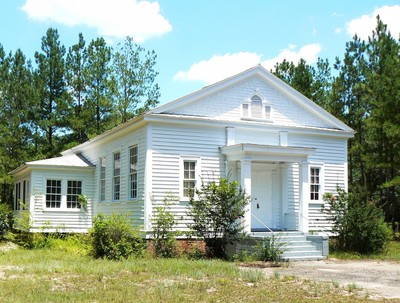 This church, founded in 1885, was named Speedwell for a stagecoach stop and the first post office in the vicinity, now Millett. In 1884-85, Ogreta Brabham Dunbar and Savannah Barker Bates raised funds for a new congregation, in what was then Barnwell County. In 1885, Mary Dunbar Lafitte and her husband John H. Lafitte donated a five-acre tract here for the church. The first church on this site, built about 1885, was replaced by the present church, which was begun in 1922 during the pastorate of the Rev. W.R. Jones. It remained unfinished during the Depression but was dedicated in 1941 during the pastorate of the Rev. J.A. Graham. Attendance declined in the 1960s, and regular services had ended by 1970. Homecomings are still occasionally held: Source: SCDAH