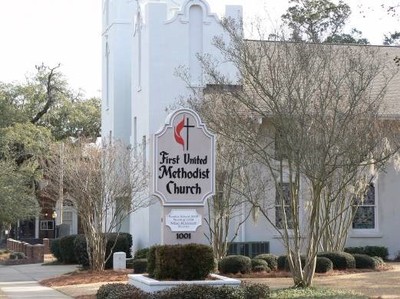 Three sanctuaries have been erected on this site. The 1844 sanctuary no longer stands, but the 1898 and 1910 buildings still exist. These two sanctuaries are locally significant for their architectural styles. They also illustrate a period of rapid growth in the history of Conway, as the congregation that erected the small sanctuary of 1898 felt the need to erect a much larger one only 12 years later. The 1898 sanctuary is a one-story, brick, cruciform, cross-gable-roofed, Gothic-influenced building. It is located at the site of a ca. 1845 sanctuary. It is laid in Flemish bond and features Tudor arched stained-glass lancet windows with lozenges. The eaves have exposed rafters and purlin ends. Adjacent to this sanctuary is the 1910 sanctuary, designed by Joseph Leitner, an architect from Wilmington, N.C., and built by Henry P. Little, a Conway builder and contractor. This Mission Revival style (Spanish Colonial Revival) building is a large one-story, front-gabled-roof, stuccoed building. Two square bell-towers with shaped parapets and corner posts frame the entrance bay. Both towers feature staggered, rectangular, one-over-one sash, stained panels and blind and louvered panels with key-blocks and drip moulds. Above the entrance parapet is a round-headed, recessed blind arch. There are knee-brackets supporting the overhanging eaves. When dedicated in October 1910, its seating capacity was estimated at 500. When the fourth sanctuary was built in 1961, this building was converted for use as a fellowship hall. Source: NRHP, UMC