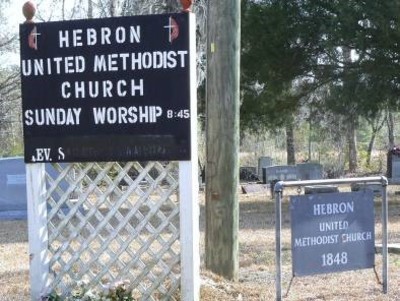 Hebron Church, thought to have been built ca. 1855, is a good example of mid-19th century, rural South Carolina church architecture. According to church tradition, Hebron was built by the workers from the local mill and ship-building industries that were thriving during this period and which helped to develop the area. Hebron is also considered tangible evidence of the Methodist tradition in Horry County, said to date from the 18th century. This rectangular “meeting house form” one-story church rests on approximately 50 brick piers and is sheathed with vertical board and chamfered-edged batten siding. The gable roof is covered with tin, replacing the original wooden shakes. The entrance to the church is covered with a slightly lower, pedimented, projecting portico supported by five square, wooden columns. The ceiling of the portico is plastered and painted, an atypical feature for buildings of this period. In 1958, church school rooms were added to the rear of the church. In 1961, brick steps were added to the front of the structure. The pews are original and are pine with beaded trim and carved moldings. Included within the nominated acreage are two graveyards: the church graveyard and the Henry Buck family graveyard located across the road. Source: NRHP