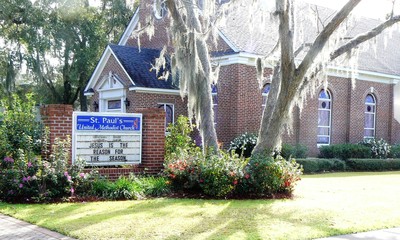 Organized in 1890, St. Paul’s is the oldest church in Ridgeland, with its origins in several area Methodist congregations before the Civil War. When Julius G. Sipple of Grahamville encouraged Methodists in Ridgeland to organize a separate congregation, Rev. J.R. Buchanan led the formal organization of the new church. Its first sanctuary, a frame building, was built nearby in 1891. In 1927 the Gillisonville Methodist Church, organized in 1886, merged with St. Paul’s. This sanctuary, across the street from the original church site, was built in 1949 as a gift from Mr. and Mrs. William J. Ellis and was renovated in 1990. Six members of St. Paul’s later became Methodist ministers: Revs. Robert Drew, Leroy Dyches, Elton Hendricks, Carolyn Malphrus, James Thompson, and Robert Way. Source: SCDAH