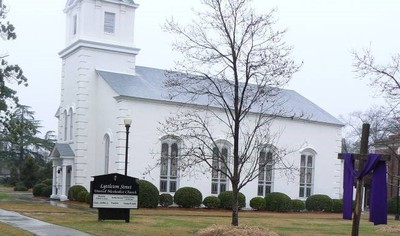 The first meeting house in Camden was a small, long, plain, unimpressive structure. It was constructed about 1798 on King Street, midway between Church and Campbell Streets. A few years later, the building was enlarged and painted. After the 1825 Quarterly Conference, a lot on West DeKalb Street was purchased and a new church was built. The simple edifice with plain adornments was completed in 1828. In 1830, a small parsonage was erected on the rear of the property. Two generous members of the DeKalb Street Church, Mrs. Sarah Ciples and Mrs. Amelia Haile, deeded about four acres of property at Hampton and Lyttleton Streets to the Methodist Church in 1851. They built and furnished a spacious 10-room Methodist parsonage. Early in 1875, a building committee was appointed. The site used for the simple rectangular brick structure was on the property endowed by Mrs. Ciples and Mrs. Haile. A year later, the basic structure was complete. It was dedicated in May 1879 and stands today. In 1896, the Lyttleton Street Church was enlarged by 20 feet and an organ was installed. In 1899, the exterior of the brick church was plastered. Sunday School rooms and a steeple were added in 1900. In intervening years, many improvements and renovations were made to the stately building. Source: NRHP; www.lsumc.net/templates/System/default.asp?id=38956