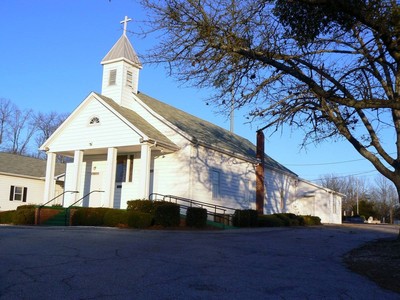 Camp Creek United Methodist Church was organized in 1798 by Bishop Francis Asbury. Camp Creek is the second-oldest Methodist church in Lancaster County. It is one of the oldest known Methodist churches in upper South Carolina. On July 10, 1798, Middleton McDonald deeded 10 acres of land “with Meeting House together” to the church trustees, William Marlowe, Thomas Howze, George Hicklin, Gideon Glaze and John Graham. The first church was said to be of hand-hewn logs and put together with wooden pegs. It is not known how long the log meeting house was used as a house of worship. In 1809, Rev. William Capers was sent as pastor to serve the Wateree Methodist Episcopal Circuit, a large appointment of 24 churches that included Camp Creek. Rev. Capers was the first known pastor of the church. Since that time, more than 57 ministers have served the church. The present church building was erected about 1835 and is reputed to be the third building upon the church lands. The timber in the one-room 30'-x-50' frame building is hand hewn and was put together with wooden pegs and nails by hand in the Bell workshop. In 1952, the church was moved about 140 feet closer to the paved highway and completely renovated. Sunday School rooms were added to the rear of the church, and a front porch, graced with large columns and a bell tower, was built. Since then, other renovations have been performed. In 1984, a vinyl-siding project was completed. The old church was completely covered with white siding to retain the original appearance while protecting the old timber. The recreational building that was built in 1955 was torn down in 1981 and replaced with a modern educational/recreational facility. A Consecration Service was held November 1, 1981, for the new 3,943-square-foot building. In June 1993, the Docia Bell Recreation Area was dedicated in honor of the church’s oldest member, Docia Threatt Blackmon Bell. Mrs. Bell died July 4, 1994, at the age of 101. A picnic shelter was added to the area and was dedicated on October 12, 1997. Also of interest is the cemetery, located at the rear of the church. Some of the largest and most stately monuments to be found anywhere in the county are located here. The grave of Col. Dixon Barnes is located in the cemetery. Gen. John Bratton Erwin, for whom Lancaster’s Erwin Elementary School is named, is also buried there. Source: SCDAH; Camp Creek web site (www.campcreekumc.org)