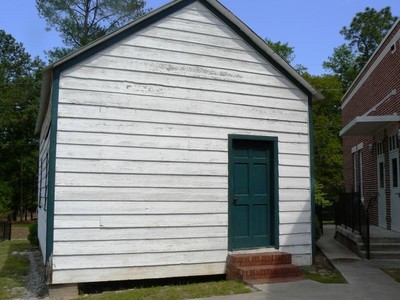 Local tradition and contemporary records indicate that the Mount Hebron Temperance Hall was constructed in 1862 as a meeting room for members of the local temperance group. Located in West Columbia, it is the only identified building constructed specifically for use as a temperance meeting hall remaining in Lexington County. It is associated with the long and generally unsuccessful state and national temperance movement of the 19th century. Interest in temperance in South Carolina increased as the 19th century progressed. In 1829, the first statewide temperance society was organized, and by 1847 the South Carolina division of the national organization known as the Sons of Temperance had been chartered. In South Carolina, local societies were formed as subdivisions of the state organization. One such group formed in the neighborhood of Mount Hebron Methodist Church. A charter was issued to the Saludavill Division No. 47 by the national division in December 1858. Although many of the members of the temperance society were also members of Mount Hebron Methodist Church, the division did not meet in the church building. The hall is a small, one-story rectangular structure sheathed in weatherboard, with a gabled cypress-shingle roof. It stands in the churchyard of the Mount Hebron United Methodist Church. The interior has a single room with wide board flooring and flushboard walls and ceiling. There is no plumbing or wiring. Eventually, the church took over the temperance hall for use as a Sunday School building and Boy Scout Hut. The building was restored in 1979. It was listed in the National Register on November 24, 1980. Source: NRHP, UMC