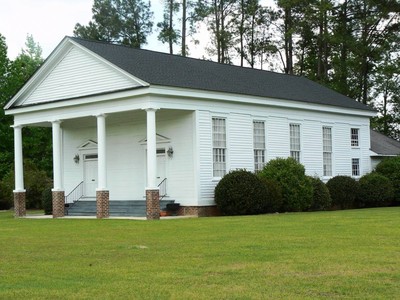 1735 was the year that All Saints was built by settlers in the Britton’s Neck area of what is now Marion County. Started as an Anglican Church, perhaps because this was the official church of the Colonies, the first minister, Dr. Robert Hunter, is not on any list of the Church of England. However, he does appear on the list of Presbyterian ministers, as does his successor, Rev. Robert Allison. In 1786, Bishop Asbury visited the area. The Britton’s Neck Society of Methodist was created either as a direct result of his visit, or it existed prior to his visit. All Saints had struggled since the Revolution, so in that same year it voted to merge with the Society of Methodist. So here is a church that started as Anglican in 1735, had pastors who were Presbyterian, and became Methodist in 1786.The Methodist worshipped in the building until 1858 when it was dismantled, moved to Old Neck Cemetery, and rebuilt. By 1917, membership had declined and Old Neck merged with Nebo. Old Neck was again dismantled, moved to its present location, rebuilt and named Central. So today’s Central is in the same building, but not the same location, as All Saints built in 1735. That is over 275 years.Is a building that has been dismantled, moved and rebuilt twice the same as the original? Well, probably not exactly the same but close. However, Central has another claim as a first. In 1918, Trustees at Nebo, Bostick, Graham, Bay and Old Ark schools united to establish the first rural high school in South Carolina. According to one of its former members, Dr. Robert Bass, since there was not a high school building available, the students met for the first year at Central. Thus, what may arguably be the oldest Methodist Church in South Carolina housed the state’s first rural high school.