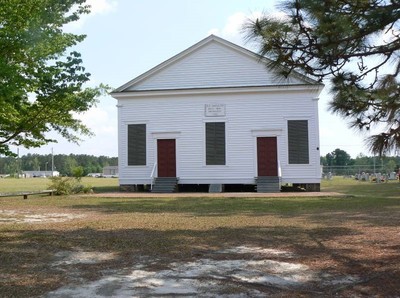 As noted earlier, there are a significant number of Methodist Churches that are among the first in South Carolina but have not earned recognition from any of the three bodies that provide recognition as a historic site. In addition, there are several Methodist Churches that are on one or more of these lists but are not currently affiliated with the United Methodist Church. An example of one of these is Old Ebenezer in Marion County. Located near the Marion-Dillon county line about 1.5 miles off U.S. 501 at the intersection of Roads 197 and 22, the church began in 1786 when two Methodist circuit riders (Hull and Mastin) started 26 meeting houses between Cheraw and Georgetown, most under brush arbors. Later, meetings were held in homes, then in a log cabin church, and in 1855 a church was built near the present site of Old Ebenezer in Marion County. A woods fire destroyed that building in 1855, and the present building was built in 1856. Services were discontinued in 1966. In 1968, the Ebenezer Memorial and Historical Association was formed to maintain the building and grounds. Ebenezer Methodist Church, also known as Old Ebenezer Church, is basically the simple, pragmatic meeting house-style church with two entrances on the main façade, corresponding doors on the rear façade, and a gable roof. However, the builder chose to add refinements to the basic plan: cornices and pilasters indicate the influence of the classical revival idiom. Built in 1856, this one-story rectangular church has a surface of white clapboard. Old Ebenezer rests on low pillars of handmade brick, which provide an open basement of about three or four feet. Between the three pillars of the main façade are two wooden stairways, each with six risers. The matching side façades are the width of five bays, with windows identical to those of the front façade. The heritage of Old Ebenezer Church is found in the history of Methodism. In opposition to the Anglican practice of identifying a clergyman with a certain church, Methodists advocated itinerant preaching, known as “riding circuit.” This practice, particularly successful in late 18th-century rural America, was led by Francis Asbury. Church members accept Asbury’s journal entry of March 15, 1787, which referred to a meeting held in the immediate vicinity, as referring to the origins of their church. The present church was built in 1856 and supervised by William Dillon, a local businessman and builder, while the manual craftsmanship was the work of slave artisans. A slave gallery, which was later removed, corroborates the pre-Civil War construction date. Source: NRHP