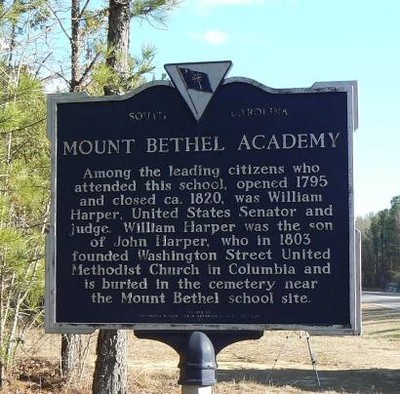 Located about 1 mile northeast on land conveyed by Edward Finc, this school – the first Methodist educational venture in the state – was established by Bishop Francis Asbury and opened by him in 1795. A number of Mt. Bethel students became the first South Carolina college graduates. The first Methodist conferences in the state outside Charleston met here at Finch’s home in 1793. Among the leading citizens who attended this school, which opened in 1795 and closed ca. 1820, was William Harper, U.S. Senator and judge. William Harper was the son of John Harper, who founded Washington Street Methodist Church in Columbia, and is buried in the cemetery near the Mount Bethel school site. Source: SCDAH; UMC