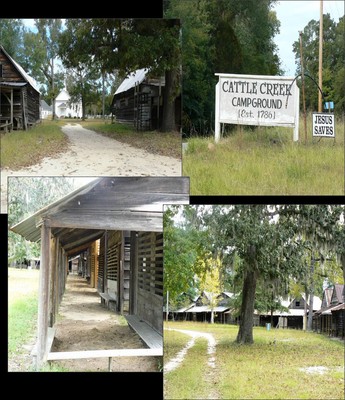 Cattle Creek Campground, situated near the Orangeburg County towns of Rowesville, Bowman and Branchville, consists of 36 cabins, called “tents,” arranged in a wide semi-circle around an open pavilion structure known as the “stand” or “tabernacle.” At the northwest end of the camp-meeting ground is Cattle Creek United Methodist Church; between the church and the tabernacle is a cemetery. The camp burned in 1898 and was gradually rebuilt over the next several decades. The campground is one of only three Methodist camp-meeting grounds remaining in South Carolina. Significant for its association with the early history of Methodism in South Carolina, Cattle Creek Campground is also notable as a surviving example of a social institution important in rural America during the 19th century. The tents, so named because the first campers and worshippers stayed in cloth tents and lean-to’s made from limbs and branches, are built of rough, unpainted lumber, have gable roofs covered with metal or composition shingles, and generally measure about 20 feet by 30 feet. Each tent contains two rooms downstairs with dirt floors and one or two rooms upstairs, which are reached by a small stairway or ladder. All of the tents have porches with shed roofs. The cooking is done outdoors at the rear of the tent over an open fire. In the center of the campground is the “stand,” an open shed about 56 feet by 81 feet with a metal, gabled hip roof. Source: NRHP