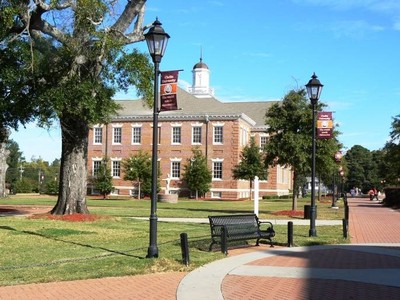 Claflin College was founded in 1869 as Claflin University. It is the oldest historically black college in South Carolina and was established to “advance the cause of education, and maintain a first-class institution...open to all without distinction of race or color.” It was named for two generations of the Claflin family of Massachusetts – Lee Claflin (1791-1871), a prominent Methodist layman, and his son Gov. William Claflin (1818-1903), who supported and helped fund the new institution. The S.C. Agricultural and Mechanical Institute opened at Claflin in 1872 and was the predecessor of S.C. State University, founded in 1896. Claflin, associated with and supported by the Methodist Church, featured in its early years industrial, manual and agricultural training; primary and secondary education; and college-prep and college courses, including architecture, law, teacher education and theology. Claflin is known for its historic buildings and sites, as a campus of outstanding architectural harmony, and for its natural and landscaped beauty. Three of the university’s historic buildings – Tingley Memorial Hall, the Arthur Rose Museum (formerly the Lee Library) and Ministers’ Hall – are included in The Council of Independent Colleges’ Historic Campus Architecture Project. Tingley Hall is an elegant Georgian Revival composition, with fine proportions and ornate masonry detailing typical of the style. The Lee Library has an unusual, picturesque plan and classical details in its brickwork; it is a fine example of the inventive adaptations of classical precedents from the late Victorian period. The three other contributing buildings to the district, also constructed of brick, are Trustee Hall (ca. 1910), Wilson Hall (1913) and the Dining Hall (1913). Sources: SCDAH; www.claflin.edu/Campus/campus.html