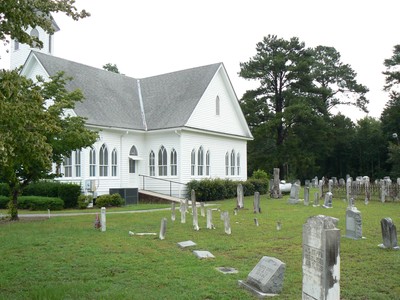 This church, founded about 1800, is one of the oldest Methodist congregations in this part of the state. It takes its name from Target Branch, a nearby tributary of Four Holes Swamp. The name “Target” is thought to be a corruption of the “tar gates” along the edges of the swamp, where tar, turpentine, and timber were harvested. It held its first services in a brush arbor, with a sycamore stump for a pulpit. Target Methodist Church was one of several area congregations long served by circuit riders, on the Cypress Circuit (1810-1855), then on the Providence Circuit (1855-1916). Its first permanent church, a log building, was rebuilt as a frame sanctuary in 1830. A second frame church built in 1873 was replaced by the present sanctuary in 1920. The cemetery here includes graves dating as early as 1820. Source SCDAH