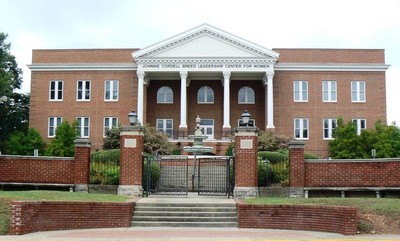 On February 8, 1854, representatives of the South Carolina Methodist Conference voted to establish Columbia Female College in Columbia, S.C., whose mission would be “to educate young women for fruitful service to church, state and nation.” The decision to establish the College was a bold and progressive move by the Church in an era in which the subject of female education was being hotly debated. Attendees at a Phi Beta Kappa address in 1853 were told, “The best diploma for a woman is a large family and a happy husband.” An article in the Southern Christian Advocate the same year pointed out that both sons and daughters must be well educated because “the yoke matrimonial sits heavily upon those between whom there exists a marked intellectual disparity.” Columbia Female College officially opened in 1859 with an initial student body of 121 and a faculty of 16. When General Sherman and his troops marched through Columbia in 1865, the school had to close. It was saved from being torched only because Professor of Music W.H. Orchard, having heard that all unoccupied buildings would be burned by a certain hour, left his home to stand in the doorway of the College where he could be seen by the troops. The school was reopened in 1873. The college was damaged by its first fire in 1895, although the damage was not extensive. The name changed to Columbia College in 1905 after it was moved to its present site in North Columbia in 1904. Swept by a second fire in 1909, the college operated out of its former Plain Street facilities until the North Columbia campus could be reoccupied in 1910. From 1940 to 1951, Presidents Guilds and Greene oversaw Columbia College as well as Wofford College in Spartanburg. In 1964, a tragic third fire ravaged the campus, destroying Old Main, a college landmark. Frightened and disheartened students, huddling in the middle of the night in College Place Methodist Church, were told by President Spears, “Nothing has been destroyed that cannot be rebuilt.” Soon thereafter new interest in the College was engendered, and building continued. The columns of Old Main, which had been the only thing left standing in the ashes when the fire was over, became a symbol of Columbia College, its strength and its endurance. Source: SCDAH; Columbia College web site (www.columbiasc.edu/about/history.asp)