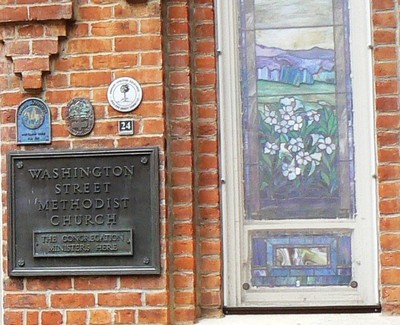 Washington Street United Methodist Church is one of Columbia’s foremost historic churches. Organized in 1803, the congregation built a frame church that was the first house of worship in Columbia. A brick structure built in the 1830s burned in 1865. According to legend, the church was destroyed by Union soldiers looking for the First Baptist Church, site of the first meeting of South Carolina secession convention, who were directed to Washington Street by a Baptist sexton. A small chapel built of brick salvaged from ruins was replaced by the present church, which was erected with funds collected throughout the nation. Completed in 1872, the Washington Street Church is a red-brick Victorian Gothic church with double-shouldered buttresses and a large arched center entrance with double doors flanked by similar arched entrances. The church features a fully developed tower with a steeple on the left side of the front façade with matching lines extending to the roofline on the right. Both towers are topped with four pinnacles with unusual crown-shaped ornaments, giving the appearance of Islamic influence. Stained-glass windows depict the life of Christ without using human figures. Source: UMC, NRHP, SCDAH