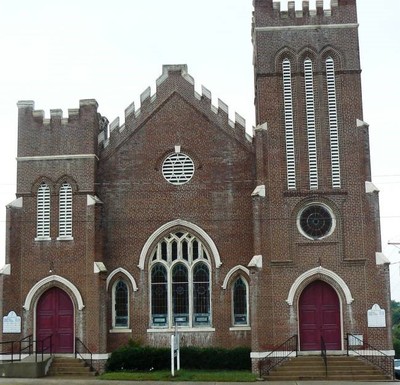 Wesley Methodist Church is the oldest African-American Methodist congregation in Columbia. It was founded in 1869 by Rev. J.C. Emerson and was a separate black congregation instead of forming from an established white church. First called the Columbia Mission, it met upstairs in a Main Street building and later built its own chapel. About 1910, the Columbia Mission bought a lot and was renamed Wesley Methodist Episcopal Church. The Gothic Revival church, built in 1910-11, was designed by noted Columbia architect Arthur W. Hamby, who designed other churches in Columbia as well as in Winnsboro, Bishopville, and St. Matthews. Its high-style Late Gothic design is relatively unusual for an African-American church of its period, and is notable for its two asymmetrical towers, decorative brickwork, and pointed-arch stained-glass windows. Source: SCDAH