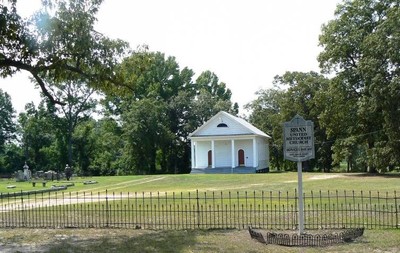 Founded around1805 at the plantation of John Spann Jr., about 1 mile north, Bishop Francis Asbury preached there in 1807 and 1811. The first church on this site was built and the cemetery was established ca. 1840. The present Greek Revival sanctuary, built in 1873, is almost unchanged. It is architecturally significant as a remarkably intact example of a vernacular meeting house that illustrates provincial faithfulness to the Greek Revival while alluding to the Romanesque Revival. The two-bay wide by six-bay long temple-form frame building features an engaged tetra-style portico with a pedimented gable roof on the façade and an open bed pediment at the rear. Pilasters at the front corner of the building reflect the portico’s square tapered wooden pillars with recessed panels. The round arched windows and doors and the louvered lunette in the pediment, both allusions to the Romanesque Revival movement of the late 19th century, soften the austere lines of the building and distinguish it from other vernacular meeting houses in rural South Carolina. The cemetery includes a significant collection of funerary art from the late 19th and early 20th centuries. Many of the grave markers reflect the Victorian sentimentality and preoccupation with the rites of death. They include popular motifs and forms such as weeping willows, lambs, tree stumps, obelisks and a draped urn. The oldest marked grave dates to 1842. Clinton Ward (1828-1905), a member of this church, was a prominent landowner and a state representative (1880-1883). The Charlotte, Columbia, & Augusta Railroad ran its tracks through Ward’s property about 1870. He laid out and planned the town first named Ward’s Depot, then Clintonward, then Wards, and finally Ward. Clinton Ward, his wife Martha, and their daughter Josephine are buried here. Source: NRHP