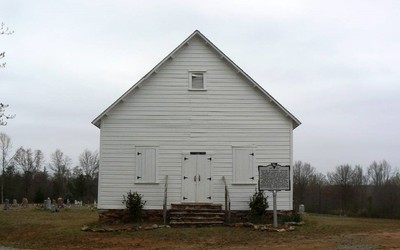 Organized around 1786, Shiloh held its first services in a brush arbor and later constructed a log meeting house. This frame sanctuary, built between 1825 and 1830, was the second building to serve Shiloh. In 1836, Adam Gramling Jr. donated it and 3 acres to church trustees William Brooks, Adam Gramling Sr., John Gramling and Ruben Gramling. Shiloh, founded shortly after the American Revolution, is the mother church of many Spartanburg County Methodist churches and some affiliated with other denominations. It was active until about 1915, when its last 14 members transferred to Inman Methodist Church. The old sanctuary, still an important part of the community, has been the site of an annual homecoming service since 1915. The building is significant as a particularly intact example of the vernacular meeting house form of ecclesiastical architecture common in rural churches in the late 18th and early 19th centuries. It is the earliest surviving church sanctuary in Spartanburg County and one of the earliest in the South Carolina Upcountry. The church’s simplicity of form and materials, as well as its strikingly rural and pastoral setting, has been preserved for more than 175 years. It is a simple, unadorned, one-room, rectangular building constructed in a vernacular meeting house form and clad in whitewashed, horizontally-applied drop (or German) siding. The church cemetery occupies the back portion of the 3-acre lot. The grave markers in the cemetery, dating from 1816 to 2004, are a mixture of granite headstones, still in good condition, old markers with barely legible lettering, and some with unreadable letters even by tracing the stones. Many graves are marked by plain field stones.Shiloh Methodist Church was a circuit church for most of its existence, dependent on a minister traveling a circuit to preach at several churches. About 1915, the last 14 members of the congregation transferred their membership to Inman Methodist Church, now Inman United Methodist Church, which owns the historic church and cemetery. Source: UMC, NRHP, SCDAH