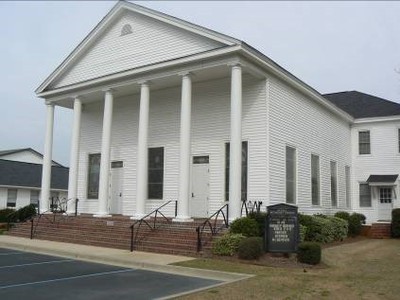 Methodists arrived in South Carolina by the end of the 18th century. By 1787, a congregation organized by Rev. Richard Swift was meeting at Rembert’s Church, about 4 ½ miles north of the present church’s location. Within four years, Methodists were also gathering for worship at various camp-meeting grounds. One of the most popular of these grounds was Lodebar, situated about 1 mile west of Bethel. Lodebar Church was formed at this site by 1814. As early as 1811, a congregation was meeting 2 miles south of the Bethel site in Clark’s meeting house. Another church, Sardis, was situated 1 mile east on Scape Ore Swamp. These churches continued to grow until 1856 when Clark’s church built a new church that was consolidated with Lodebar’s, along with additional members from Rembert’s and Sardis. This new building, completed and dedicated in 1858, would be called Bethel, meaning “House of God.” The church was built by its members and their slaves with hand-drawn and hewn timber donated by members. In 1859, it became clear that a cemetery was needed, as three young sons of Capt. J.F. Michaux died of diphtheria within days of each other. These were the first graves placed at Bethel cemetery.In 1879, an acre of land on Lodebar Road was given by M.T. McLeod for the purpose of building a parsonage. In 1880, Brother J.S. Beasley and his family moved in. Over 20 years later, in 1902, the church purchased land in the village of Oswego and built a new parsonage at a cost of $1,300. This is on the site of the present brick parsonage, which was built in 1940. At Bethel Church, in 1917 more comfortable pews made of oakwood replaced the original hand-made ones. The original pews were sold to Clark’s church. One of the original pews still remains at Bethel. In 1949, Bethel added 10 classrooms in a two-story structure that forms two wings across the back of the present-day church. In 1966, a small chapel was designed by Ellis Cook and built to provide space for dinners, church meetings and receptions. This building is called “Little Bethel.” Now more than 140 years old, Bethel UMC, stately and serenely beautiful, symbolizes the faith and service to God of devoted and courageous congregations. Source: SCDAH; Bethel UMC web site (www.bethelumcoswego.org/history.html)