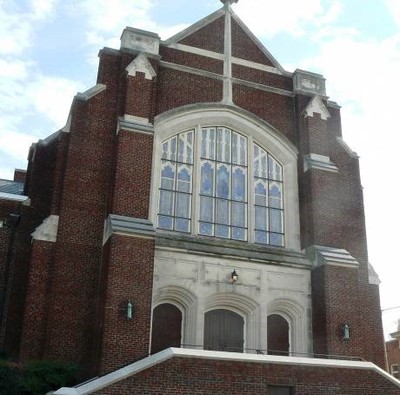 Before a Methodist church was organized, an itinerant minister would come to preach to a group of people who met in a framed schoolhouse called Pine Grove Academy. It was located in a pasture on property owned by the White family who lived in the large White house at the corner of East White Street and Elizabeth Lane, directly behind St. John’s Center. It was located near the present intersection of North Confederate Avenue and Pendleton Street, which is near present-day Confederate Park. In 1856, Rev. John Wesley North was appointed to the Yorkville Circuit. He helped organize the Methodist church in Roc. Mrs. Richard Springs, whose husband was well-to-do, was very generous in getting a church started and contributed toward a parsonage as well as to the church; she was known as the “Mother of Methodism in Rock Hill.” In 1856, the first Methodist church was built at the intersection of Hampton and Black Streets on property that had been purchased from Alexander Templeton Black. This same building was used by First Baptist Church after the Methodists vacated it in 1878. The building was dedicated on June 21, 1857. The Methodists met on the first floor and Masons on the second floor. The church had two sections of pews – men sat on one side and women on the other, except for courting couples, who were allowed to sit together. Cuspidors were placed at the end of the men’s pews. The church was heated by wood heaters and lighted by kerosene lamps hung on the walls. Members brought their own hymn books and Bibles for each service. In 1876, the church building was sold and the second building was built. It was a brick church on Main Street almost opposite Hampton Street and constructed at a cost of $4,250. It was dedicated in June of that year. Around 1893, the church became known as St. John’s Methodist Episcopal Church South. The name was probably changed because Cornerstone Methodist Church (Laurel Street/Main Street) was founded just a few years later. In 1897, the building was 21 years old and Rev. Sam Zimmerman was pastor. A wooden house next door burned, and the church was condemned because the extreme heat caused the walls of the church to become warped. A new site was bought at the corner of Main and Caldwell Streets, and the third church building was erected. Lumber from the old church was reused, and the famous clock was refurbished and reused. The building was dedicated in 1902 by Bishop W.W. Duncan. Source: NRHP; www.stjohnsrh.org/visitors/history/briefhistory.php