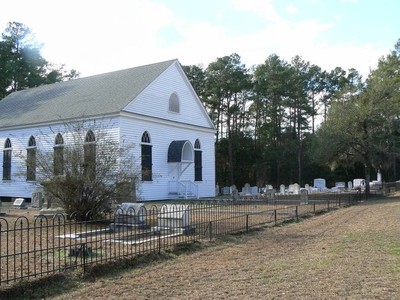 Constructed in 1856 in the village of Buford’s Bridge, Mizpah United Methodist Church is the only extant building from the old Barnwell District town that flourished in the 19th century but had all but disappeared by the early 20th century. The braced-frame, sheathed-in-weatherboard church is an extraordinary surviving example of the vernacular meeting house form, typical of many rural South Carolina churches, but with the added sophistication of both Greek Revival and Gothic Revival elements. The historic cemetery surrounding the church contains gravestones and iron Maltese cross markers for a number of Confederate veterans, as well as those for many of the church’s early families. In fact, some of the gravestones are signed by their cutters. According to local tradition, Mizpah United Methodist Church was the only residence or institution in the Buford’s Bridge community that was not burned or otherwise destroyed by Federal troops during their stay during the closing days of the Civil War. Mizpah Church is significant as a tangible reminder of one of Bamberg County’s earliest and continuously functioning Methodist congregations. Source: NRHP, SCDAH