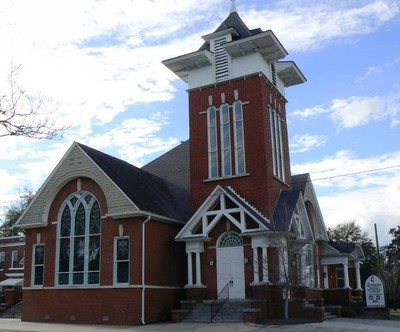 The Bamberg Historic District is a significant collection of around 56 contributing buildings from the period 1880-1930. Most of the buildings are residences or bungalows with prominent porches and profuse carpenter’s ornamentation; a few of the largest and most notable buildings express the more fashionable architectural styles of the era, including Second Empire, Neo-Classical, Queen Anne, Victorian, Romanesque Revival and Gothic Revival. The district also includes a cemetery dating from 1852. The buildings are set on landscaped lots with tall trees. Trinity was designed by Edwards & Walter of Columbia and built in 1904-1905 by J.A. Benson. The building has a hip-roofed main block with projecting gabled wings on the north and east. A tall brick tower, with the entrances to the church at its first floor, is situated between these wings. The entrances are marked by gabled porches with paired Tuscan columns. Each side of the tower features three tall arched windows. The tower has a pyramidal roof with very wide packed eaves that are broken by hipped wall dormers. The north elevation of the building features a traceried Gothic window in its projecting wing and an entrance to the right of this wing with an elliptical-roofed porch. Source: NRHP