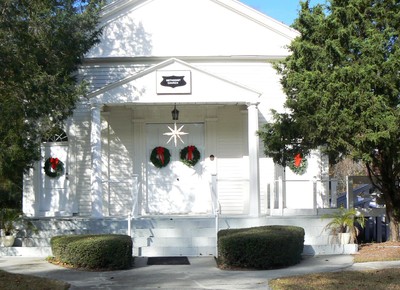 St. Luke’s Church, also known as Bull’s Head Church, constructed in 1824, is architecturally significant as a representation of the transition between the Georgian style, characteristic of earlier Episcopal churches in South Carolina, and the developing Greek Revival style. The result is a blending of both styles into a well-proportioned, simple, rural house of worship. St. Luke’s Church is one of the oldest surviving frame churches in South Carolina built for the Episcopal Church. It is one of a small number of churches in the state that have intact slave galleries. The rectangular meeting-house form church has a gable roof covered with composition shingles. The main façade features a box cornice with full return, echoed by a small gabled portico. The portico is supported by two hexagonal timber columns and two pilasters. An additional entrance is to each side of the portico, and is surmounted by a fanlight. These doors were originally used as entrances to the gallery. The seats within the gallery consist only of tiered planks. Each window has wood shutters and is surmounted by a fanlight. A cove ceiling runs the length of the sanctuary. The enclosed pews have doors providing access from the side aisles. Behind and to each side of the church is a graveyard with more than 400 above-ground tombstones, dating from the early 19th century. Source: NRHP