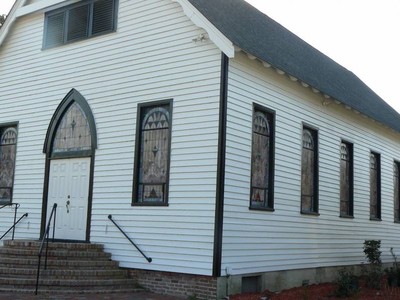 Pinopolis Historic District South, which contains 13 properties, consists of the historic core of the planters’ retreat community of Pinopolis. The district contains numerous early- to mid-19th century summer houses, the Gothic Revival-influenced Pinopolis United Methodist Church (ca. 1900), and other later 19th century buildings. Interest in building a Methodist church in Pinopolis, according to local historians, was present as early as 1887. The site of the current church was purchased from the estate of William Cain in 1897 for $100. The present building was dedicated in April 1900. Lafayette Parker loaned the church $500 needed to construct the building with the requirement that the timber be of long leaf pine. It is a single-story, frame building sheathed in weatherboard with a steep gabled roof and a small open belfry. The façade is three bays, with a lancet arch encompassing the central double doors and single round-headed windows flanking. The church rests upon a brick pier foundation, which has been in filled with brick. Source: NRHP