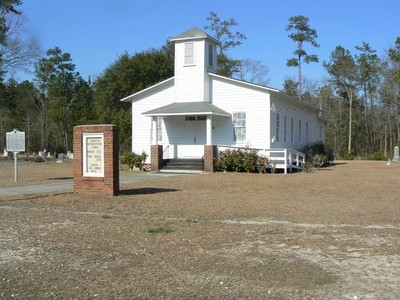 This church grew out of services held as early as 1811, at first in a brush arbor and later at a nearby campground. Ministers riding the Cooper River and Berkeley circuits served this congregation for many years. The first sanctuary here was given to the Methodists by area Episcopalians in 1847. Called Black Oak, it had been built in 1808 as a chapel of ease for Biggin Church. In 1852, Charles Macbeth (1805-1881), the planter and politician for whom this community was named, donated a 15.3-acre tract to the congregation. The cemetery, which dates from the 1830s, includes the graves of Rev. John Bunch, who served from 1837 to 38, and Rev. William J. Hutson, who served in 1870. The present sanctuary was built in 1927, during the pastorate of Rev. D. Tillman Rhodes; it was renovated in 1977. Source: SCDAH