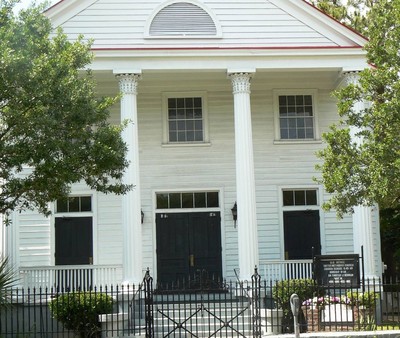 Begun in 1797 and completed in 1809, Old Bethel Methodist Church is the oldest Methodist church building still standing in Charleston. Construction of the original meetinghouse-style church was planned by Francis Asbury, the first Bishop of American Methodism, in the 18th century. The founding of Old Bethel Church by both black and white members was indicative of the Methodist Church philosophy of encouraging black membership in the church. Originally located at the corner of Pitt and Calhoun Streets, the church served a congregation of blacks and whites until the 1840s when the blacks seceded. In 1852, the church was moved to the western part of the church grounds where it was used by the blacks. A new brick church, Bethel Methodist, constructed on the original site, served an all-white congregation. Old Bethel was again moved in 1880 when the building was given to the black congregation and was rolled across Calhoun Street to its present site. Originally a gabled meetinghouse-style church, the white clapboard building has been altered by the addition to the façade of a gabled portico supported by four fluted Corinthian columns. A central double door is flanked by single doors on either side, and these entrances are surmounted by segmented transoms. Within the front gable is a semi-circular louver. The brick foundations of American bond dates from 1880. Source: NRHP