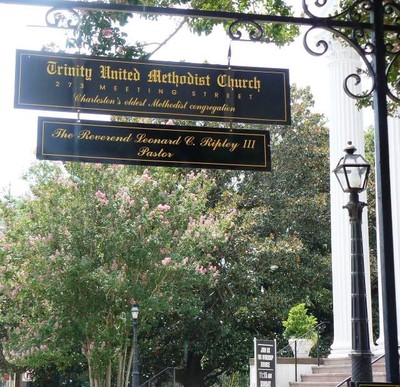 The first Trinity Church building was erected in 1792. By 1813, Trinity had joined the South Carolina Conference, and in 1874 it merged with Cumberland Church, the oldest Methodist Church in Charleston, which was founded in 1786. During the 1920s, Trinity was moved to its present location on Meeting Street, where the cemetery records are now located. Methodism in America was organized officially at the “Christmas Conference” in Baltimore, Md., in 1784. On February 27, 1785, Francis Asbury arrived in Charleston, where he founded the city’s first Methodist congregation. This would become the Cumberland Street Methodist Episcopal Church, with 35 white and 23 black members in 1786. The fifth session of the South Carolina Conference began at Cumberland Street Church in February, 1791, but it was held over a day or two pending the arrival of Dr. Thomas Coke who had been shipwrecked off Edisto Island. Coke was traveling from Jamaica in the company of Rev. William Hammet, a native of Ireland and a member of the British Conference. Hammet had been preaching in the West Indies since 1786 with some success, but he also faced some strong opposition to Methodism’s antislavery principle. Since Hammet had become very ill, Coke brought him to Charleston for a change of climate and situation. At the Conference in Charleston, Hammet’s inspired preaching captivated the congregation, some of whom demanded that the eloquent Irishman be assigned as Cumberland’s pastor.