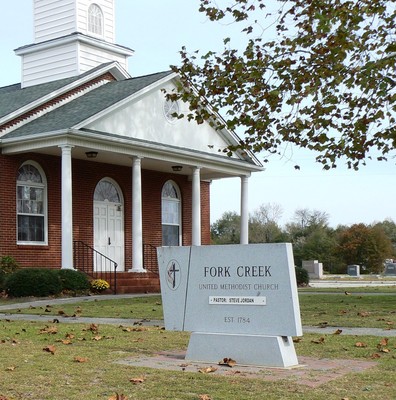 Organized in 1784 by the Rev. Aaron Knight and known initially as Knight’s Meeting House, Fork Creek is one of the oldest Methodist congregations in South Carolina. It became known as Fork Creek in 1792 and has met on its present site since that date. The current structure, erected in 1967, replaced one destroyed by fire. The site has remained the same since 1792. This is its fifth building. Bishop Francis Asbury first visited in 1790 and made Fork Creek a regular stop on his visits to South Carolina congregations. A young William Capers had a Wesley-type experience at Fork Creek. After attending Dr. Roberts’ academy in Statesburg, Sumter District, from 1801 until 1805, young Capers entered South Carolina College as a sophomore. But in 1808 he left college and began the study of law with Judge Richardson. He joined the Methodist church in August 1808, and soon afterward, through the influence of William Gassoway, an itinerant preacher, decided to accompany him on his rounds. It was at Fork Creek later that same year, Capers wrote, that the simple, earnest faith and happy shouts of the people drove conviction to his heart, and he gave his life to God. Fork Creek has been the mother church for this area. It has been responsible for the founding of several churches in the area and has played a central role in the life of those living in the surrounding communities. Source: UMC