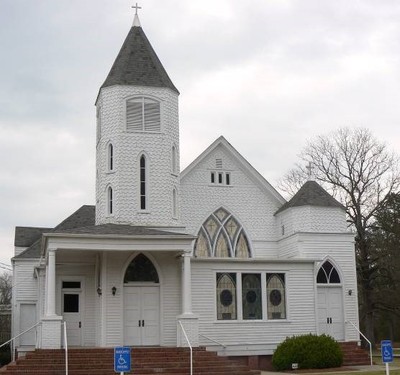 Established in 1789 as the “Gully Meeting House,” Wesley Chapel is one of the oldest Methodist churches in South Carolina and the oldest Methodist church in Darlington County. The first log meeting house was built half a mile north of the present church on the western bank of Boggy Gully in the western part of Darlington District, 14 miles from the courthouse on the land of Ephraim Hendrix. He was a local preacher and preached there when the circuit riders on the Great Pee Dee Circuit did not come. Camp meetings came into South Carolina around 1800. Rev. James Jenkins, in his Methodist history, writes about one he attended in the old Gully Camp Ground. “Here, amid much opposition, they had a glorious time,” says Jenkins. “George Doughtery, the presiding elder, reproved from the stand certain outlaws and called on the congregation to notice if the judgments of God didn’t overtake them.” The meeting was filled with rowdies “who hollered, cursed, drank and fought,” he says. “Preaching they wouldn’t hear, but if at any time there was a religious shout raised, this noisy crowd of hoodlums would come rushing to the altar of prayer, laughing and ridiculing the work of God.” That Sunday, a woman began praising God aloud during the sermon. The hecklers came thundering into the camp like a herd of buffaloes, the minister writes. At once, the presiding elder announced as his text, “And the herd of swine ran violently down a steep place and were choked in the sea.” Jenkins reports that “he preached with such power that the miserable rowdies before him seemed spellbound and stood like ones paralyzed. Soon they left in confusion for home.” In 1809, the famous Bishop Capers had a confrontation at the Gully Meeting House with a woman reputed to be a witch. He asked “Brother D” why they didn’t put her out of the service and he said, “Oh, we’re afraid of her. She kills chickens, cows and horses with hairballs.” Although the congregation thought he was doing a dangerous thing in incurring the anger of a witch, the bishop put her out. It was the same “Brother D” who criticized the bishop, saying, “Brother Capers, I believe you are a good man, but oh those galluses.” He was referring to the bishop’s red suspenders, since in that day it was considered a sin to wear bright colors. The congregation worshipped in the Gully Log Meeting House until 1837, when it was given six acres of land nearby for $10. The Methodist met in the small frame church built on this site until 1857, when they built a new frame church that was used for 51 years. In 1908, a fourth church was built, the present Wesley Chapel. More than 600 people attended the dedication and heard Dr. John C. Child preach the sermon from Romans 8:15-23. Sources: September 30, 1979, edition of The State newspaper, “Church Marks 190th Year" by Barbara H. Stoops; SCDAH