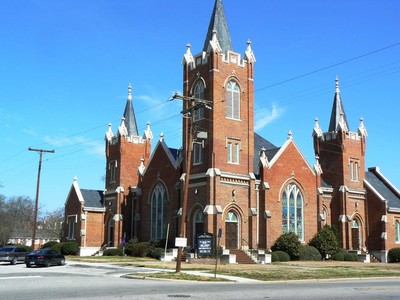 This church, founded in 1892, built its first sanctuary at West Main Street and Third Avenue, where the Dillon County Courthouse now stands. That lot was donated by James W. Dillon (1826-1913), for whom the town and county are named. The original church, a frame building, was moved to the corner of Third Avenue and Hudson Street in 1910 to make way for the new county courthouse, which was completed in 1911. The first sanctuary, a brick cruciform church in the Gothic Revival style, was designed by Charlotte architect Oliver D. Wheeler (1864-1942). Completed in 1914, it only stood seven months before it burned in January 1915. The congregation worshipped in the courthouse until a new church was built. Wheeler also designed the present sanctuary, which duplicates his original design and was completed in 1916. Source: SCDAH