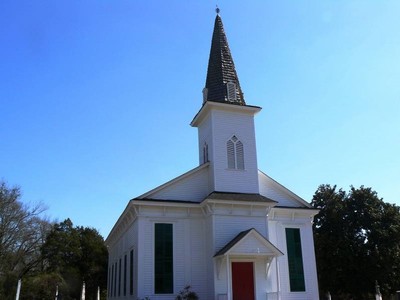 Formerly named Liberty Chapel, the church originated in 1786 when Bishop Francis Asbury organized a preaching station on the Little Pee Dee River located across the road from the old Stackhouse home. As settlers living at a distance brought their families in wagons to the services, often remaining over at least one night, the location became known as the Gaddy Camp Ground. Before 1803, the church was relocated near Harllee’s Bridge, just south of the Evander Bethea home. The name of Liberty Chapel was adopted prior to September 17, 1814, when Philip Bethea designated it as such in his will. As the new site eventually proved unsatisfactory, the church was relocated at Harlleesville. Presumably, Thomas Harllee donated the land for the building, as in 1823 he deeded an acre of land to be used for a church, and in 1844 his son, Thomas Harllee Jr., donated land adjacent to the chapel property for a school. The new location also became known as the site of the Harlleesville Camp Meetings, which continued annually until 1848. In 1871, a new building was erected at the present location in the town of Little Rock, the new name for Harlleesville. At that time, the name of the organization was changed to St. Paul’s Methodist Episcopal Church, with W.C. Power as its first minister.