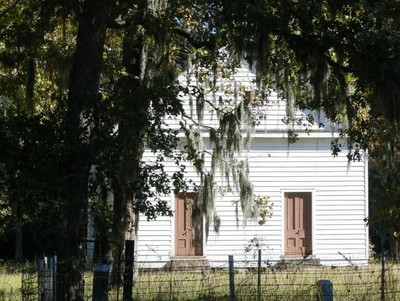 Appleby Church is presumably named for James Preston Appleby, who donated four acres of land for the church site. The building is an excellent example of the Greek Revival, meeting house-style of church architecture. It is a one-story wooden structure built upon low brick piers. It was probably built ca. 1840-1850 and is virtually original. The front façade features two double doors, each having two panels. Three low brick steps lead to the entrance. The side façade s each have four evenly spaced 9/9 windows; the rear façade is identical to the front, with the exception of having only one double door. The building is clapboard, and the medium gable roof is presently covered with asphalt shingles. The cornice is boxed. On the church’s interior, two rows of pews, thought to be original, are divided by a central aisle. During the state’s Tricentennial celebration in 1970, signs were placed along the walls indicating that which is believed to have been the original seating arrangement in Appleby Methodist Church. The northern area was designated for “gentlemen,” the southern area for “ladies and courting couples,” and the northwest area was an “Amen Corner.” Source: NRHP, SCDAH