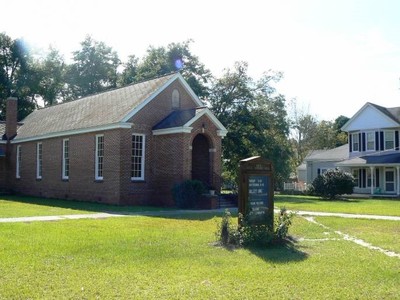 Possibly as early as 1735, British colonials arrived in the area upon which the town of Salley developed. The present-day town formed during the decade of the 1880s on a 1,000-acre plantation located two miles southeast of John Town. D.H. Salley, the plantation’s owner and a member of the South Carolina General Assembly, had become aware of plans for railroad transportation of kaolin from a mine in nearby Sievern. He laid out a plan of streets and avenues, and also established the first school in the area on his property. He successfully negotiated the train’s path through his land and later secured incorporation papers for the community of Salley. Listed on the NRHP as part of the Salley Historic District, Salley Methodist is a T-shaped building with a front gable roof of diamond asphalt shingles. Gable vents are present and the roof line features a boxed cornice with return. There is one external capped chimney. Also featured is a one-story entry portal with a rounded arch with stone imposts and keystones. The porch only covers the doorway and like the roof is gabled with a boxed cornice and return. The double-leaf door at the entry has four lights on each door and a five-light transom above it. A rear double-door entry features the same type of doors covered by a shed roof. The double-sash windows feature a nine-over-nine light configuration and are of yellow stained glass. Windows in the transom and at the rear are six-over-six double sash. Each window has brick sills and lintels. The church also features soldier-course bricks just above the vented brick foundation. Source: NRHP