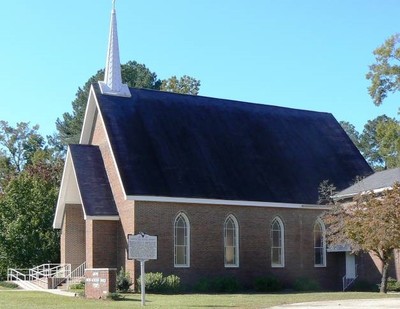 This church was founded in the early 19th century as Murray’s Church and served by ministers riding the Cypress Circuit. It was originally named for the Murray family, which also gave this town its first name of Murray’s Crossroads. The first church here, damaged by a storm in 1878, was replaced by the present church, built of heart pine by Philip and Jim Liston in 1890-97. Murray’s Church was renamed Grover Methodist Church in 1905, after the Murray’s Crossroads post office was renamed Grover. The church undertook several renovations in the 1960s, covering the 1897 frame church with brick veneer, remodeling an early 20th century school for its Sunday School building and later a fellowship hall, and moving the 1912 bell from the steeple to a bell tower. Source: SCDAH