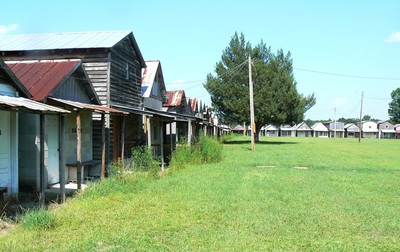 This campground, established about 1870, is the largest of four Methodist campgrounds in Dorchester County. Tradition holds that Ceasar Wolfe and a group of former slaves, caught in a storm, stopped in a grove here for shelter. Rice planter S.M. Knight asked them to help harvest his fields, and after they did so he gave them this spot as a place of worship. They named it Shady Grove. The group first met under a brush arbor but later built “tents,” the rough-hewn cabins typical of church campgrounds. The first tents burned in 1958 and were replaced; fires also occurred in 1969 and 1976. The “tabernacle” here is the centrally located shelter where services are in session, ending the fourth Sunday in October. A trumpet call on a ceremonial horn opens the meeting. Source: SCDAH