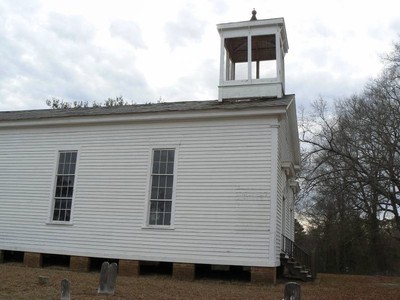 Ruff’s Chapel was the first Methodist Church built in Ridgeway. It was built by a prominent Ridgeway merchant, David H. Ruff, who is buried in the small cemetery surrounding the church. Built about 1870, Ruff’s Chapel is a single-story, rectangular frame building, sheathed in weatherboard, with a front gabled roof. There are two sets of double doors on the façade, topped by four-light transoms and simple entablatures supported on scroll brackets. The roof is covered with embossed metal shingles. The square open belfry has a metal covered bellcast hip roof with a ball finial. According to tradition, Mr. Ruff threw 60 silver dollars into the metal when the bell was cast, to give it a silvery tone. The bell was removed for safekeeping after an attempt was made to steal it. Source: NRHP