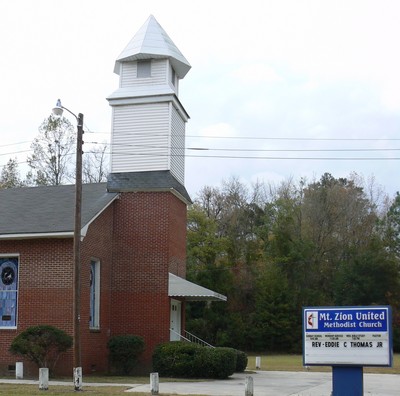 Founded in 1868 with Rev. James Wesley Johnson as its first minister, Mt. Zion held its early services in a brush arbor. In 1870, trustees purchased a 1 ¾-acre tract to build a “Negro Schoolhouse” sponsored by the church, the first in the Mars Bluff community. This sanctuary, originally a frame building, was built in 1875 on a tract purchased from the school. The sanctuary was extensively remodeled and covered in brick veneer in 1970. The nearby cemetery, established in 1876, includes the graves of such early church leaders as Anthony H. Howard (1840-1908), a former slave who served in the S.C. House of Representatives during Reconstruction. Howard was also one of several black farmers who grew rice here after the Civil War. Source: SCDAH