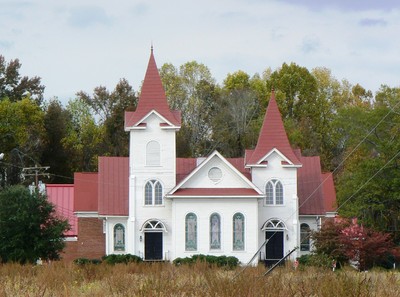 Founded in 1806 in what was Darlington District until Florence County was founded in 1888, Pisgah Church grew out of an early Methodist “Society.” Rev. Thomas Humphries (d. 1820), who served Darlington District and other area circuits, conducted the church’s first service. In 1813, Dempsey Russell donated an acre to the congregation, which soon constructed a frame building as its first permanent church. The church, often called “Russell’s Meeting House” or “Russell’s Church” for Dempsey Russell, changed its name to Pisgah Methodist Church in 1840. It moved to a site a few miles west after the Civil War but soon returned to its current site and built a larger frame church in 1878-79. The present church, built in 1914, is a fine example of the Carpenter Gothic architectural style. Source: SCDAH