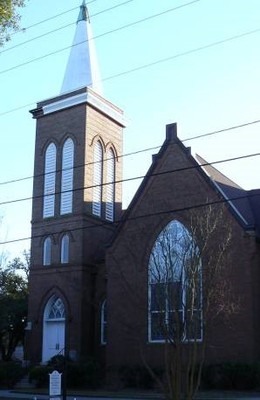 Bishop Asbury, accompanied by Woolman Hickson, Jesse Lee and Henry Willis, said of their arrival, “We crossed Lynches Creek, Black Mingo and the Black River and arrived in Georgetown, where we were met with a kind reception.” Then, when Asbury’s group headed for Charleston, Woolman Hickson was left in Georgetown with William Wayne, the first Methodist convert in Georgetown. Wayne was a cousin of Revolutionary War hero Anthony Wayne and later became a Methodist minister. A marker for Wayne and his wife Elizabeth Tresvant is located on the site of the land he gave to erect a church building. Available records do not tell us when the first building was constructed. It is believed to have been located near the eastern line of the property and faced Highmarket Street. The next was on land bequeathed by William Wayne and facing Orange Street. This church was a wooden building with colored-glass windows and was called the “1833 church.” In 1840, a bell was purchased and a cupola erected for its accommodation. This was one of the bells of Georgetown give to the Confederacy in 1862. It was replaced in 1895 by the bell that is in the tower of the present sanctuary.