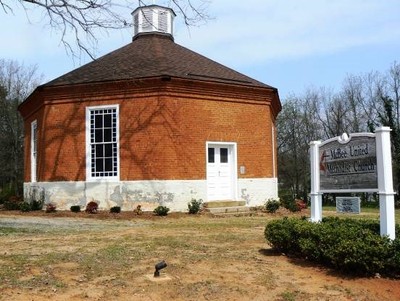 Architecturally unique, McBee Methodist Church was designed ca. 1842 by John Adams, a local wheelwright who felt that more seating space could be secured by an octagonal arrangement. The little structure is a fine example of octagonal architecture in vogue in the United States from the 1840s to 1860s, its prime advantage being that it encloses one-fifth more floor area than a square with the same total length of wall. In addition, octagonal design offered a new aesthetic dimension to American architecture at this time. The eight-sided brick structure has a pyramidal asphalt-shingle roof topped by an octagonal louvered cupola. It also features a molded brick cornice and a whitewashed base. The small stained-glass panes surrounding larger panes of clear glass were added at a later date. The balcony, formerly used by slaves prior to the Civil War, was later removed and its door converted to another window. The church has a seating capacity of 150. The church was named for Vardry McBee, the “Father of Greenville,” who provided funds for the little church. Source: NRHP