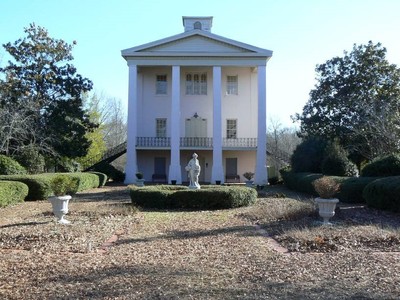 The Old Cokesbury College building was built in 1854 in the Greek Revival style. It has a bell tower, four square columns rising from ground level to pediment, and a double-door entrance at the second-floor level. The Masonic Female College of South Carolina, an effective though brief experiment in education for young women (1853-1874), represented ideas that were rather advanced for the times. This institution is said to have furthered the charm, character and influence of the town. From 1876 to 1918, Cokesbury Conference School was celebrated for the high caliber of its education – first operated as a school for boys, co-educational from 1882, and a public school from 1918 to 1954, when the property reverted to the Methodist Conference. The village of Cokesbury was laid out in 1824 and is one of South Carolina’s earliest planned communities. As a testament to the community’s emphasis on education, the town was developed for and around the school. The village was initially called Mount Ariel, but in 1834 residents changed the name to Cokesbury in honor of Thomas Coke and Francis Asbury, the first two Methodist bishops in the United States. Source: UMC, NRHP, SCDAH